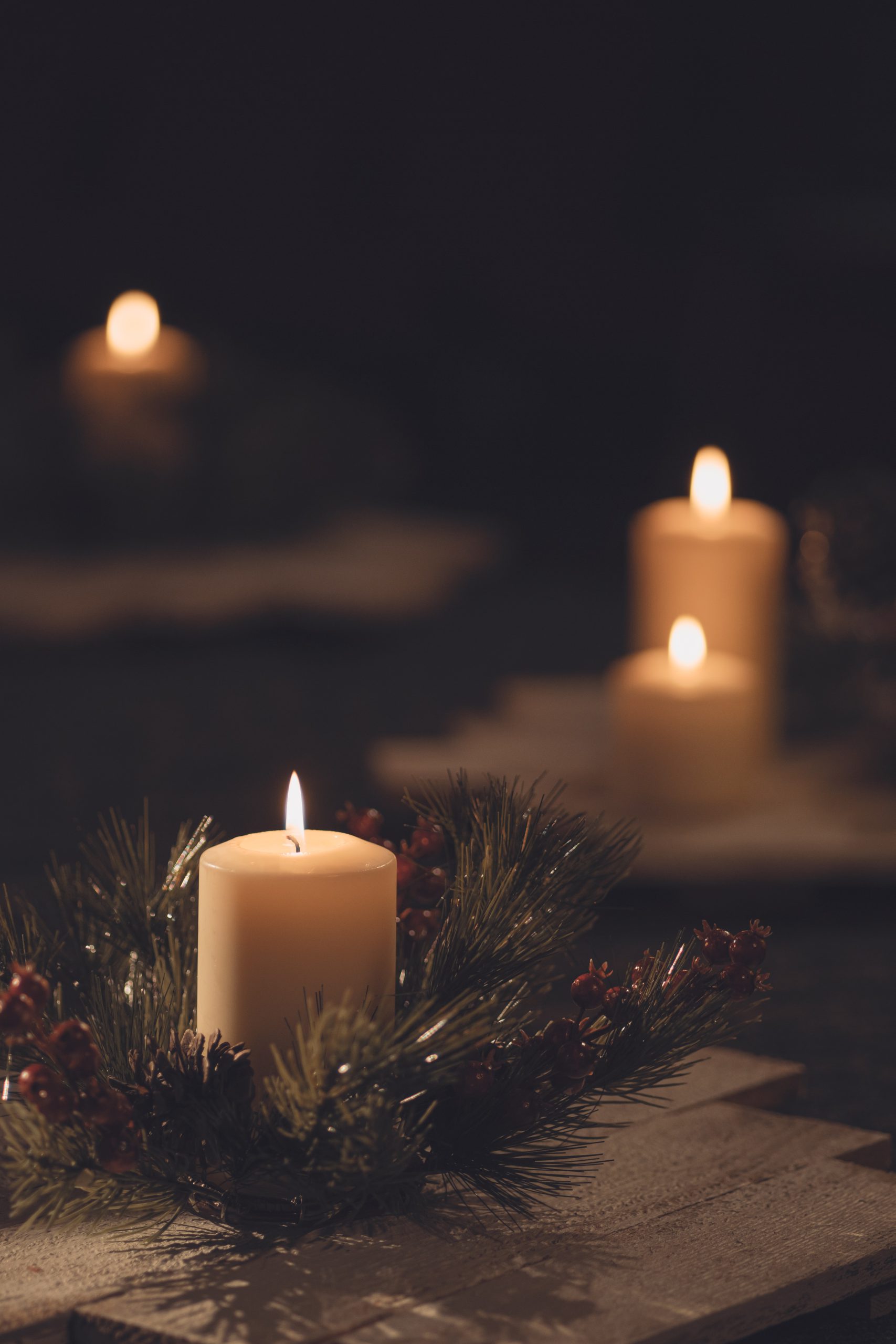 In the Christian world, the first Advent candle was lit. Christmas is coming. This year Hanukah is Dec. 18th through 26th. Hallelujah, let us all rejoice!

and the Word was God … In him was life, and the life

was the light of all people.

“Heaven is my throne and the earth is my footstool …

but to this one I will look, to him who is humble and contrite in spirit

and who trembles at my word.”

Welcome to our world! God’s handiwork surrounds us. One of our great joys is to wake up and watch the dawn overtake the night. It never fails to leave us wonder-filled. Each morning is not only new, but different, unique. At the close of her visit, one of my granddaughters commented “The mountains and sea speak to me.”

The Word of God (Logos) played an exclusive role in the creation of the world. It is the very life force that makes all of creation breathe, move and exist. The world in which we live and move and have our being was and is intricately connected to and dependent upon the very Word of God. Beloved friends, just as you and I breathe one moment at a time, so too does all of creation exist because of Him.

A month ago my son Chris and I strolled to the beach. He swam and I walked the length of it picking up shells, which is one of my favourite past times. I showed him my treasures and he remarked, “Yes, and each one is different, as is every leaf and flower in this world.”  That night, he pointed out Saturn and other constellations as we looked for falling stars. Once he excitedly exclaimed, “Mom, the milky way goes right over your house!.”

Perhaps you live in the midst of a busy city far from a garden, field or mountain. But if you are in the streets, on a subway or bus, you are surrounded by the one of a kind human creatures. Father God delights in granting the gift of Life. “Do not neglect to be kind to strangers, for thereby some have entertained angels unawares.” Hebrews 13:2  Canadian Timothy Schmatz created a life-size sculpture entitled Angels Unawares which depicts migrants and refugees in a boat. It is located in a corner of St Peter’s Square. Among those refugees the artist depicted the Holy Family and Jews. Israel is a unique homeland for Jews of every color and persuasion. It is a Noah’s Ark of safety in spite of ongoing terror. Israel a nation reborn in 1948 built by rejected and broken people, today is a first world nation.

Refugees are welcomed. In spite of all her faults, tiny Israel continue to succor those the world despises; just as the prophets, including Messiah-Jesus foretold.

“My son [and daughter], IF, you will receive My words … wisdom will enter your heart and knowledge will be pleasant to your soul; discretion will guard you, understanding (and discernment) will watch over you.”

What is happening in Israel’s Knesset?

No one knows. We don’t have a government yet, possibly Benjamin Netanyahu will not succeed in forming a  government, because of the partners he chose. When entering a battle one takes only trustworthy, loyal allies otherwise they undermine every move and can lead to defeat. The coalition negotiations are at an impasse because two possible nominees both radically right, demand Ministerial positions. This would change the status quo of Israel’s Jewish religious life and the status of non-Jews in Israel – in other words to change the face of Israel’s multi-faceted society. As power hungry as Netanyahu may be, he is, after all, a pragmatic leader and must counter extremism if he wants to be taken seriously in the wider world.

Are you stirred by the level of anti-Israel, anti-Semitic propaganda found today in the USA, Canada and Europe, particularly in the universities? Today it is predominantly verbal but is already changing to physical violence.  My husband Jay calls it the divine push of persecution. The secret is not only to see the hand-writing on the wall but to understand what is written. It’s harder for North Americans to pull up roots for Israel than for war torn Ukrainians.

“Behold, I am bringing them from the north country, and I will gather them from the remote parts of the earth. Among them, the blind, and lame; the woman with child and she who labors in childbirth together. A great company they will return here.”

A slice of life in Israel:

1. A young Israeli, Biton, lost his dear friend Aryeh in the Palestinian bomb attack last week. He was seriously injured by one of two bombs set off in Jerusalem. Sha’are Zedek Medical Center reported that a man who had been injured in a Palestinian terror attack last week had been saved from shrapnel by a Book of Psalms in his pocket. It stopped portions of the shrapnel from striking him. In a photo taken of the damaged Psalm book, pages can be seen piercing a verse found in Psalm 124: “Our soul escaped like a bird from the hunters’ snare; the snare broke, and we escaped.”

Chillingly, Biton reported that just before the bomb exploded, he saw a man taking photos of the people milling right around the bomb site.” Officials said that it was the work of a professional cell of terrorists.

2. Just days ago, a 19 year old Druze (this community Iives in N.E Galilee) decided to repair his car in Jenin, a Palestinian Authority, believing that since his native tongue is Arabic he would be safe. He had an accident, was taken to hospital and then it happened – members of the Palestinian Islamic Jihad, attacked him, ripping him away from life-support which killed him. They stole kidnapped his body. His family told the Israeli government that they did not want his body to be exchanged for anyone, they refused to risk the lives of IDF soldiers. Our diplomats used every diplomatic tool at their disposal but failed. The Druze succeeded in contacting the powers that be in Syria and Lebanon and incredibly, the Tanzim, the “army” of the PA, sat with the kidnappers for 6 hours and finally convinced them to return Tiran Ferro’s body to his parents for burial.

3. Our son Daniel, the same week was offered a job to make two promo videos for a Pastor in Ramallah, the capital city of the PA. Because of the danger to Israelis beyond our own border, he had to decline. That is our stark reality friends.

Your responses to Still Small Voice:

“Dearest Meridel your reports from your time in Canada are so helpful and inspiring,  Bless you for them. Lots of love and prayers.” C. T. England

“I want to tell you that I also had a fresh awakening to the fact this week that my fears, anxieties, and mouth can work against us and rob us of victories that the  Lord is trying to impart!  Also, I have felt so strongly recently that we all need to go privately to our closet as Jesus tells us, everyday and not let family talk and prayers steal our alone time with the Lord! “ J.S. Canada

“Since I was a newborn, my mother, put me into the care of my aunty who was Mohawk from Tyendinaga. Just before I went to school she asked my mother if she could adopt me. My mother was very offended and took me away and I never saw Aunty Doris again. I grew up and married a man who was Algonquin, three generations on his mother’s side. We moved to Haida Gwaii. (Queen Charlotte Islands) on the very West Coast of Canada, south of Alaska. I have had a heart to intercede before the throne of God for the First Nations people of Canada since  my salvation experience in 1970. Thank you – sending out that Word from Barry Wunch was the very Balm of Gilead to my heart.”   A P

“Thanks Meridel for sharing about our indigenous peoples and Barry’s vision. I pray for this great awakening among our many tribes and nations in Canada. I’ve worked with the local Blackfoot, as well as the Amuzgo in SW Mexico and the Kiche in Guatemala.

My interest in the indigenous started in high school after I gave my heart to the Lord and developed when I was in nursing school. It sealed my love for indigenous peoples. May God bless you and bless them! Our God reigns!

“Meridel you and Jay are still such an amazing inspiration! Because I grew up with such a love of Canada and its great beauty living close to British Columbia I love your writing about its history and tribal matters! Their art alone speaks volumes! I feel so privileged to have crossed paths with you in my life.“ Y.B. USA

“Jay: I really appreciate your prayers for us. I see the culture here dissolving more and more into  evil anti-Christian expression; now accepted as normal. Satan is having a heyday with the LGBT issues in our churches. Just splitting them apart and turning believers against  each other in anger and distrust and exhausting our pastors.”  G.B. Canada

Our Prayer for our Friends:

“We have not stopped praying for you. We continually ask God to fill you with the knowledge of His will through all the wisdom and understanding that the Spirit gives, so that you may live a life worthy of the Lord and please Him in every way: bearing fruit in every good work, growing in the knowledge of God, being strengthened with all power according to His glorious might so that you may have great endurance and patience, and giving joyful thanks to the Father, who has qualified you to share in the inheritance of His holy people in the kingdom of light. For He has rescued us from the dominion of darkness and brought us into the kingdom of the Son He loves, in whom we have redemption, the forgiveness of sins.”

Jesus is our burden bearer. He hears every prayer. Jesus is the silent listener to every conversation, and understands every sigh and tear. He will heal every sickness. If you have a prayer request, please email us. We read and pray over every request.

He knows the way I take …

Blessings from Jay and Meridel Rawlings