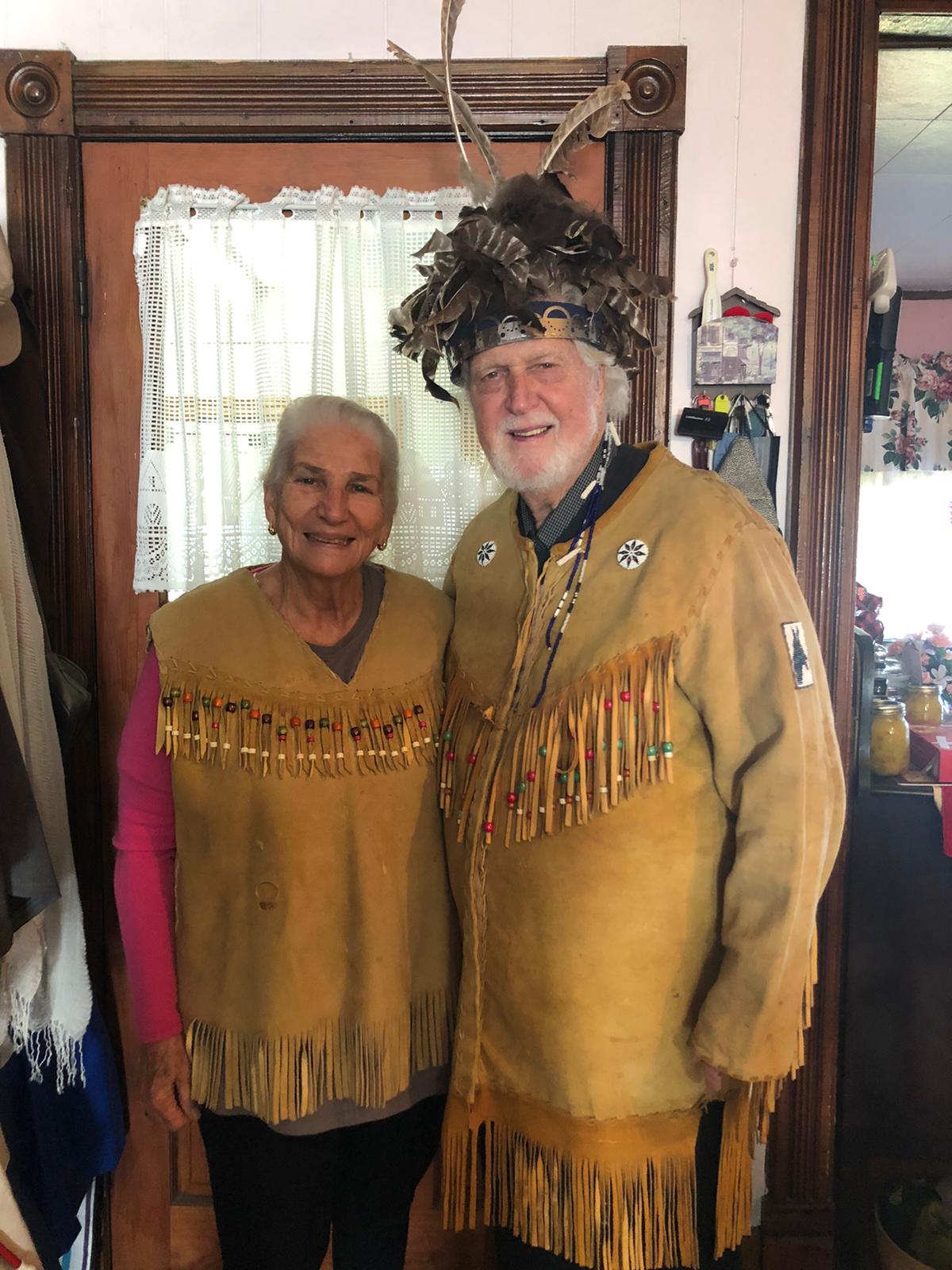 Those of you from whom I hear, are often on my heart for prayer. What a privilege it is to communicate. My theme in this Still Small Voice is tribes. From childhood my life has been impacted by many tribal groups, perhaps it all began knowing my great great grandmother was of the Shaw Clan, a Scots Highlander. I grew up with the Bible, learning in depth about Israel and her people-tribes.

“… and behold on the clouds of heaven, One like a Son of Man was coming. And he came up to the Ancient of Days and was presented to Him. And to him (The  Messiah) was given dominion (supreme authority). Glory and a kingdom, that all the peoples, kingdoms and nations should serve and worship Him.”

“At the time the sign of the Son of Man will appear in the sky, and all the nations (tribes) of the earth will mourn. They will see the Son of Man coming on the clouds of the sky, with power and great glory.”

“I want a black doll baby”, was my request as a four-year-old. Then, I became acquainted with a few of the First Nations (Indians) when my mother befriended children whenever we met them in the Yukon, including Eskimos (Inuit). My brothers and I were fascinated by tiny brightly painted houses erected over individual graves in the Yukon, complete with curtains on the tiny windows and dishes. Being little children we thought these colorful dwellings were play spaces. We felt no fear, even though we had trespassed into a sacred native burial ground. At other times, we found entire one-room school houses completely abandoned, with books and scribblers still in the desks. They had all of a sudden been abandoned. Had the former pupils been scooped up and locked into residential schools? Our parents never knew of these adventures.

The Charles Campbell tuberculosis hospital in Edmonton Alberta afforded me the privilege of nursing children of the Blackfoot tribe. I cared for tiny first nations tots who were desperately ill with meningitis in Kamloops BC’s Royal Inland Hospital. It was here that the first mass grave was discovered at a former Residential School, setting off an enormous wave of awareness and change.

Years later as a graduate nurse, when asked by the  Canadian University Service Overseas, “What do you want to do in India?”

Without a second thought I found myself saying, “I want to work with tribal people.” That began a saga in SW Madras State working with 9 indigenous tribes, and later up in Darjeeling West Bengal with Tibetan refugees escaping from the grips of Chinese invaders of their sovereign land.

During our recent prayer-tour across Canada, we were house guests in Deseronto Reservation located at the mouth of the Napanee River on the shore of the Bay of Quinte, Lake Ontario. Because our hostess is the widow of the famous Brandt family the importance of the First Nations was again brought into focus. Allow me to explain.

The outbreak of the American War for Independence and the subsequent recognition of the United States of America in 1783 had a severe impact on the relationship between the British Crown and its Aboriginal allies. I also learned that between 1783 and 1812 with Britain’s loss of the 13 American colonies some 30,000 United Empire Loyalists became refugees. These refugees called upon colonial administrators to open up new lands for settlement in what became known as Upper Canada.

Settlers (one stream of my relatives ) were not the only refugees. Aboriginal peoples who had fought alongside the British were also needing refuge  because they had been warriors for the British and were now endangered. At the same time as the European settlers were being moved, so were various tribes. The British Crown compensated its Aboriginal allies for losses they incurred during the war with the Americans. These tribes established an agricultural colony in the region. During one of my visits I stood on the crown-land, inherited by my ancestors.

Over a sumptuous Canadian breakfast, our hostess acquainted us with the First Nations history of the area.  The Mohawk and Iroquois tribes, 6 in all were settled on the beautiful Bay of Quinte in this area. Each tribe or clan is represented by an animal for example, the eagle, turtle, bear, wolf etc. The five tribal chieftains who fought for the British against American forces (which gave Britain the advantage) at that time were rewarded by being relocated north into Upper Canada.

In 1884, Queen Victoria invited five tribal chieftains to London to knight them for their gallant struggle on behalf of Britain. She gave each one the following English names: Sir Marcle, Sir Brandt, Sir Hill, Sir Green and Sir Sero. The family members I spoke with were  the Brandts, their illustrious ancestor was Sir Chief Brandt.

Forgive me for the rather short and sketchy history. Our time there was very brief and I learned as much as I could. However, I did glean the following information.

I think we are all familiar with the words, wigwams and t-pees, the various dwelling places of the tribes.

–  My hostess said: “Many of the tribes that came up to Canada were Christian and some even had a hymn book written in their own language. Of course it fell into disuse through the cruel ethnic cleansing of the Residential Schools. But the use of their languages are returning once again. One of her daughters teaches her tribal language in high school. A second daughter travels the world, speaking with other aboriginal leaders, having completed her doctorate of the commonalities of the world’s tribes.

–  The birch tree is very meaningful. I also noted this in Russia, especially in the graveyards. I was told, the tree-bark regenerates itself which is a symbol of resurrection. It is always in abundant supply and used for birchbark canoes which were sealed with pine sap.

I close with this most encouraging prophetic word over the First Nations. May it touch your spirit with a desire to pray into the divine plan. When we met with family in Picton, Ontario, the first nations were brought right into focus around their kitchen table as we learned something of their history in that very special area.

“Where brethren dwell together in unity they will lay their lives down for each other.”

“I heard a war drum and a call to gather. This drum reverberated throughout the land. This was a call to gather that had never been released. I saw it move like a wave through reservations across the land in cities, towns, along shorelines, to every island and mountain top. The frequency touched all of creation. I watched as wildlife stopped and listened to this call and what was being released. I saw bear, deer, moose and elk lift their heads. I saw birds and an eagle listening. The sound of that drum penetrated everything.

I was taken to a meadow in the mountains, sitting there was a warrior angel playing this drum. I saw angelic hosts coming from North, South, East, and West. Some of these angels looked ferocious. They gathered around the drum in a circle worshipping the LORD GOD ALMIGHTY. (the One who created and rules the universe) As they came and gathered the sound grew and the Spirit of God was released among the nations.

The slumbering giant of the First Nations was awakened from sleep. It was stirred and wide awake, rubbed the sleep out of its eyes and stood to its feet, refreshed and ready to go. The sound of the drum grew and grew as the giant was adorned in a Chief’s headdress. (a war bonnet) The sleeping giant rose up, lifted its hands in a posture of worship to the Father. It wasn’t long until he was on his knees, and there was a supernatural encounter by the Spirit pouring healing oil over this giant, bringing deliverance, healing and restoration. The giant had been frozen in time, but was now saturated in deep healing anointing oil. With every step an imprint of oil was left. It was incredible.

For Behold! The One!  All of the release of the awakening of the First Nations is upon you. Behold them and the gift they are unto the Body. There is movement. A gift is being released upon the land. Watch as they take their place. Government and legislation will shake apart as this sleeping giant comes to life.  Restore, restore, restore and holy is the world of the LORD.”  Barry Wunsch Oct 22, 2022

God’s true north strong and free. Let us all keep our hearts open to the eternal movements of the Holy Spirit.

May we rise with graciousness to the many changes and challenges of life.